Some franchise store used car managers or UCMs don’t like to admit it, but in fact, a great deal of used car sales can be attributed to shoppers on local classified sites like Craigslist. Most of these shoppers, which are sometimes referred to as “bottom feeders”, are looking for cheap used cars locally, but often times, these used or pre-owned deal-searchers turn into new car sales, leases, straight out cash purchases and/or finance deals. I say, what difference does it make? Sales are sales, and leads are leads. What difference does it really make where they are coming from?

Optimized High Quality Craigslist Postings; Craigslist is one of the largest and busiest classified sites (ranked #17 busiest site in US according to Alexa). 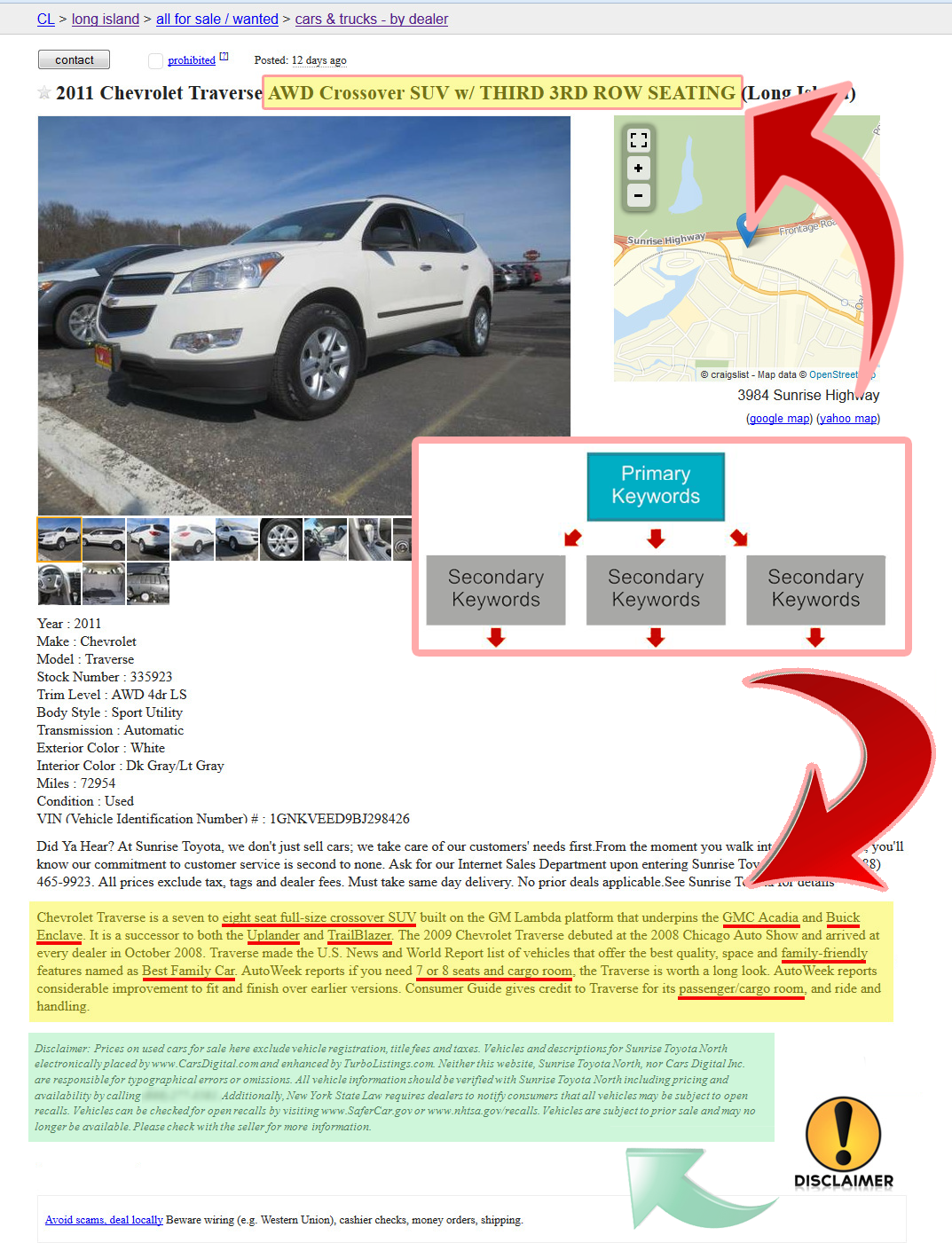 When you are considering a venue such as Craigslist, which is one of the largest and busiest classified sites (ranked #17 busiest site in US according to Alexa) you want to think about your cost and time to post. Craigslist, which is often overlooked by some dealers, is for the most part free and provides local classifieds for everything from jobs to housing, but is one of the most common lead generation tools for car dealers as it is used by more than 60 million people in the United States (Factsheet). Craigslist charges just $5.00 per vehicle posting, which remain live for 30 days and can be renewed for an additional $5.00, but posting and updating these listings can take a lot of time. That’s why we’ve designed and created our own software tool to make this process simple, easy, and very cost effective.

Our Craigslist posting tool is highly sophisticated and unique as we’ve developed it in-house. We’ve named it Turbo Listings™ because that’s what late Jed Applybe used to enjoy calling it, and that name has stuck with us in respect of his memory – and the name certainly fits. Turbo Listings is a software tool that puts your automotive posting process on turbo-boosted auto-pilot. Best of all, dealers don’t even need to use the product, because our team takes a 100% hands-on approach to the entire process by running Turbo Listings on behalf of our participating dealers. It’s a totally hands-off solution for listing your inventory on Craigslist and getting great results in the process.

Not only does Turbo Listings™ make the process easy, but it optimizes the postings to rank much better than average automotive listings on Craigslist and makes the vehicle listings appear higher on the search results pages and generally easier to find on the site due to built-in optimization of the listings. This is done by repeating certain keywords and related keywords ever-so-slightly including something only we have called a built in ‘vehicle similarities database’ which compares certain makes and models to other similar makes, models and body-styles. The system will even intercept user contacts on the listings, routing calls to the dealership, routing emails which contain valid contact details into CRMS, and routing emails without proper contact details to our internal virtual CL-BDC department for responses which prompt dealer contact.

You see, we’ve thought about absolutely everything when we built and designed Turbo Listings, which is why it is an invaluable automotive posting tool for Craigslist listings. Signup today and give a test drive or call us for more intricate details about the software.

OTHER THINGS TO CONSIDER

We also provide these Dealer Services

Send your inventory to multiple sites and apps with buyers.

* Sales statistics shown above are based on the number of vehicles we have on record as being sold across our 89 participating dealerships, multiplied by an average sale of $14,200.00. Leads delivered quantity is gathered from TurboListings.com syndication software which tracks phone and email leads, and is owned by Cars Digital Inc.,